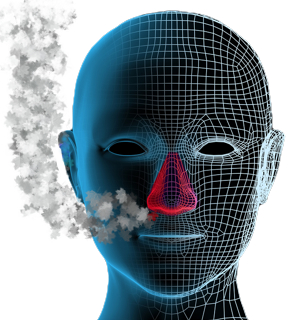 Reprogramming the Sense of Smell

One of the strongest and long lasting triggers to want to smoke a cigarette is the smell of a cigarette. This section will help you remove that trigger. A smoker thinks smoke from a cigarette is pleasant and doesn’t realize cigarettes actually STINK! It may take several weeks or months to remove this trigger. When you are repulsed by the smell of cigarettes, realize this trigger has been removed. I recommend you stay out of smoked filled rooms and stay away from people that smoke until this happens. This may seem extreme, but do it…the quicker this trigger is removed the better!

Get a small jar that has a waterproof lid, a baby food jar will work. Before you quit smoking use this as an ashtray, put 2-3 butts in it with ashes and then fill jar half way with water. Put lid on jar tightly, set aside for a week or so.

Begin this procedure the day you quit. Put cologne or perfume of your choice on the inside of the wrist of your left hand. When you want a cigarette, smell your left wrist with the perfume or cologne on it and say out loud “THAT SMELLS GOOD.” Then pick up the jar with the cigarette butts and water in it in your right hand. Remove the lid with your left hand. With your right hand bring the jar up to your nose and inhale through the nose, saying out loud

Put lid back on jar and set it down. Then bring your left wrist to the nose and smell the cologne or perfume with your nose, saying ” THAT SMELLS GOOD. ” Repeat this procedure each time you want a cigarette or several times a day. I call the scent in the cigarette butt jar, the lick the ashtray smell. It should really stink, smelling worse than cigarette smoke does. Remember to say out load, YES OUT LOUD, the verbal affirmations that “CIGARETTES STINK !!!” and that the cologne or perfume you have on “SMELLS GOOD.” It doesn’t matter which hand you use, just don’t lift the jar that stinks with the hand that has the cologne or perfume on it. You don’t want to smell both scents at the same time.